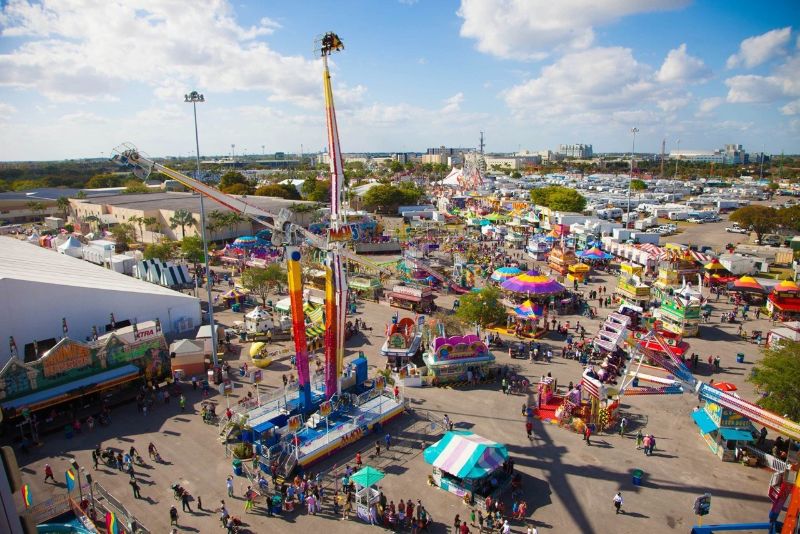 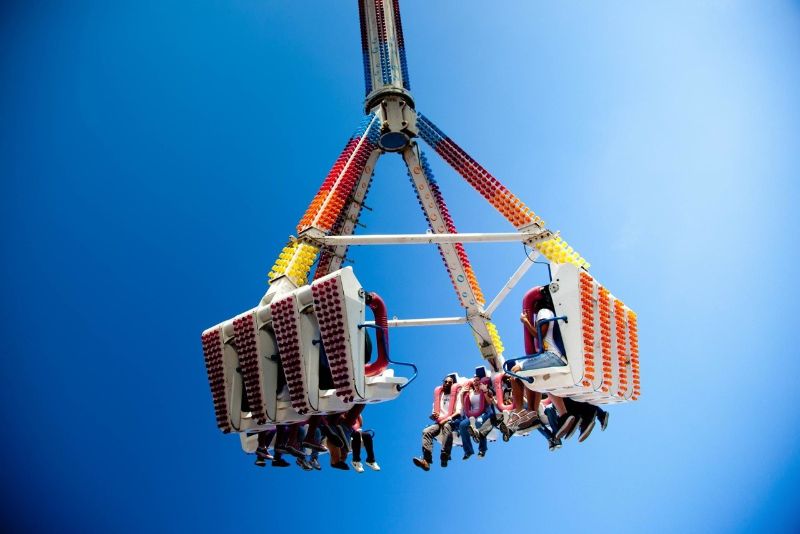 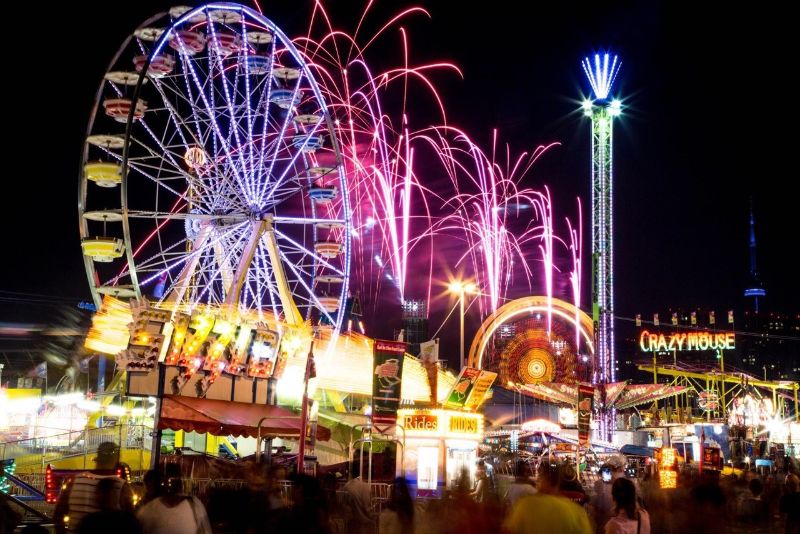 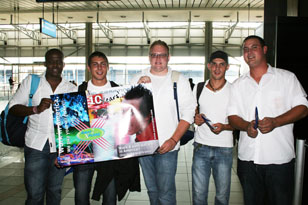 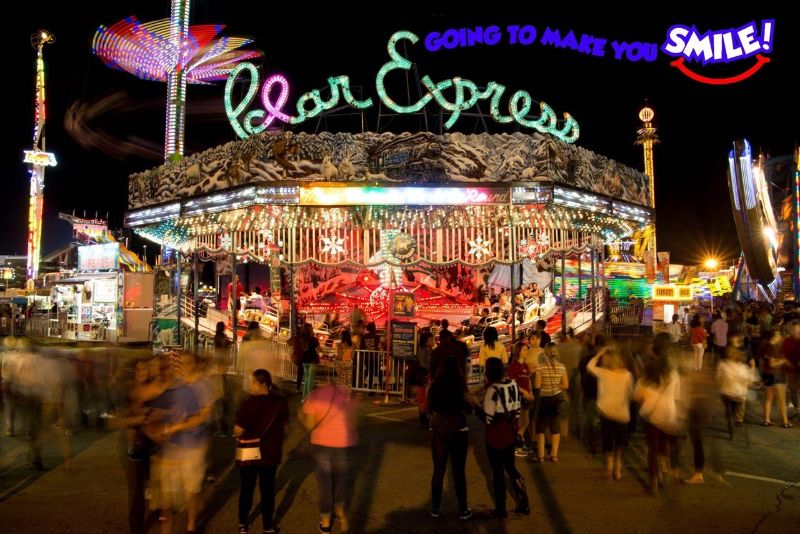 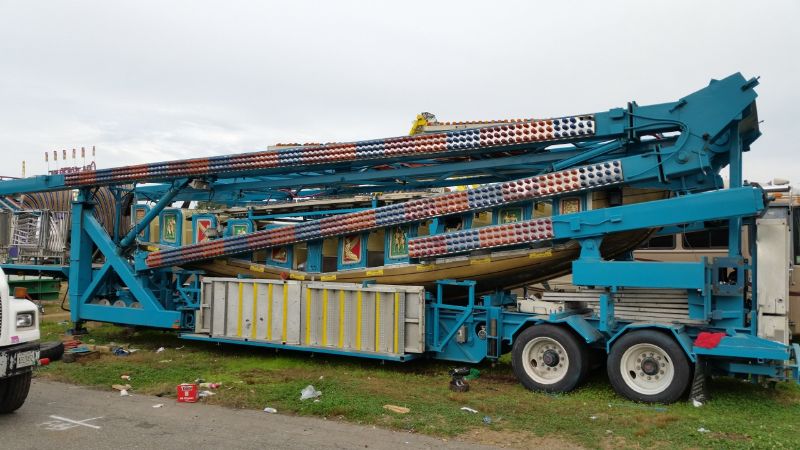 WEST SPRINGFIELD – Here is Aryn Geekie’s life: work part of the year at a nightclub at home in South Africa, spend nine months running rides across North America at fairs like the Big E.

“I like to see the new places, get to travel, get to hang out with a bunch of people,” said Geekie, 26. Geekie, Cynthia and Carlie King and Danielle Handrahan gave a glimpse Thursday into life managing the midway at a major fair in an experience they all said was like a family. Their current stop is the 17-day Big E fair at the Eastern States Exposition that wraps up Sunday. They work for North American Midway Entertainment, of Farmland Ind. The mobile-midway setup includes a school for employees’ children and the younger employees, 400 workers, 120 vehicles, 52 game concessions, 50 rides and 10 food concessions, said Cynthia King, director of guest relations. About 120 of the employees have work visas from South Africa. Companies that provide large vending services to annual fairs often hire seasonal workers abroad, King said. Geekie said he hooked up with North American Midway Entertainment seven years ago through a company called Away2xplore. The company places English-speaking South Africans with U.S., Canadian and Caribbean employers, according to the Away2xplore website. This is Geekie’s seventh trip to the Big E. What makes the Big E unique among fairs, he said, is the Avenue of States with a building devoted to each of the six New England states. “That’s very different,” Geekie said. “You don’t get that anywhere else other than here.” He is foreman of the 16 kiddie-land rides. It’s his job to make sure the machinery of the rides is inspected daily and that inspection paperwork is duly filed, he said “I look after 20 guys,” Geekie said. He is from Ballito Bay on the Indian Ocean coast of South Africa where he works at a nightclub called Crush. He thought he might work in a restaurant or manage a hotel. But that was before he joined the fair circuit that this year alone has taken him to Miami, the Canadian cities of Edmonton and Toronto, St. Louis, Topeka, Kan., Mobile, Ala. and in a few days, Columbia, S.C., he said. He is not married – “No kids, no ties” – and likes dealing with the people and machines of a fair, he said. “I like getting my hands dirty. I’m a hands-on guy,” he said. Participating in the erection of the mini-city that is a fair’s midway is among the experiences that establish bonds between employees, King said. “That’s a huge draw,” she said. King, 41, has worked for North American Midway Entertainment since she was 15. She grew up in Winnipeg, Canada and lives in Florida. The life of a midway worker does exist outside the mainstream, she said. But King and others contend it is nothing like the odd or even evil perception held in popular culture of such a life, the “carny” existence enacted in movies and shows like the HBO series “Carnivale.” “It’s nothing like that. If you could see the behind-the-scenes and the bonds that you form out here,” said King, who has attended several South African weddings. “I still get their baby pictures,” King said. The caravan includes sleep trailers and a trailer for the school. Currently the school has 11 students. The traveling ensures students get to learn by seeing, such as watching the U.S. Congress in action to learn about bills in Washington, D.C. or visiting Gettysburg, Penn. for instruction on the Civil War, she said. Carlie King, 18, her daughter, has been traveling with the fair and attending its school almost exclusively since pre-school. The younger King, who works in the midway ticket office, said she spent a year attending school in Ohio but missed the fair life. “I couldn’t handle it, all the kids, all the drama and students. I’m not trying to talk bad about public schools. I’m sure it’s great,” she said, but it wasn’t for her. The traveling and being with fair friends was her home. The school’s size ensures daily one-on-one instruction from the teacher, she said. “Plus,” Cynthia King said, “they can’t skip school. Where are they going to go?” “We can’t slack off because (the teacher) knows what we can do,” Carlie King said. Handrahan, 19, is from Prince Edward Island, a Canadian province. She has been with North American Midway Entertainment since June. She read online about the job on the Canadian version of craigslist known as Kijiji, she said. “Just hopped on a plane,” said Handrahan, who operates kiddieland rides. “I love the people. It’s kind of like a family here. There’s a lot of South Africans. They’re really cool. I’m actually going to South Africa. I met my boyfriend here,” she said. “See how fast your life changes?” Cynthia King said. “Yeah,” Handrahan said, “metamorphosis.”